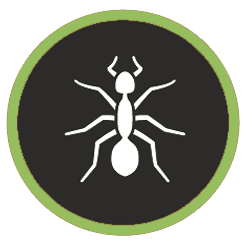 If you take a look at most successful businesses, there are similarities throughout. It usually starts with strong leadership, workers having specific jobs and specialized training, and everyone working together for the greater good. It makes you wonder if we copied that model from one of the most diverse creatures in the animal kingdom, the ant. There are over 12,000 species worldwide, and an estimated 1.4 million ants, about 10lbs, per person. To put this in perspective, that amounts to about 10 billion billion of the little pests, nearly 3,000 million tons.

At the top of our ant corporation is the queen. Like a great CEO, her only jobs are to grow the colony and look for expansion when necessary.

Some species’ queens are capable of laying over 1,000 eggs per day and living for thirty years. That’s 500 times longer than their male counterparts.

The board of directors comprises younger ants whose job it is to protect the queen and the young. Even though she is in power, her staff decides what jobs they want. As her team ages, they move to roles that take them farther away from the queen and closer to the colony’s center. Rounding out the team is the thousands of workers who search for food and do what they can to prevent a hostile takeover. With everyone working together, the colony seems to act as a single organism.

The synchronization of jobs would not be possible without excellent communication, and by using pheromones, the entire colony is on the same page. If you have ever wondered how one ant seemingly becomes a trail of hundreds, pheromones send out the signal that a food source has been located. A similar trail is then followed, guiding the workers back to the colony. Pheromones are also used to warn each other of a threat, attract a mate, and alert the others of a dead colony mate. Scientists have found that pupae, the stage before they become adults, can communicate with sound.

Some species diversify, and like a profitable business, create subsidiaries in the form of new, attached colonies. These supercolonies can have millions and billions of members, multiple queens, and spread out over great distances. One in Southern Europe spanned 3,700 miles.

In Utah, there are fifty-seven species for home and business owners to deal with. Up north, we contend with the Carpenter, field, and pavement ants, to name a few. Pavement ants are the most common and make their way into your home looking for sweet and greasy foods. Unfortunately, the Carpenter is looking for something heartier. They look for soft or decaying wood to chew through and create spaces to lay their eggs and create nests. They can cause structural damage similar to termites, but they don’t eat the wood as termites do. They are not particularly aggressive but can inflict a painful bite.

In Cache, Box Elder, and Rich counties, Cache Pest Control is here to help get your ant issues under control and have the insects looking for a new location. We are Northern Utah’s most trusted exterminator. Our estimates are free, so contact us at the first sign of ants and most other troublesome bugs.