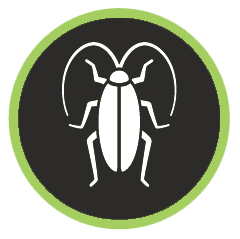 A cockroach is the last pest you want to find in your home. It is repulsive both physically and psychologically. It is grotesque-looking, with a long, oily body, large antennae, and six spindly legs covered with tiny claws that allow them to scurry away quickly, easily gripping and scaling any surface. On an emotional level, they invoke feelings of extreme disgust and revulsion because we associate them with unsanitary conditions, vermin, disease, and filth. The reality is you can have a problem even when you maintain an immaculately clean home.

One of the worst aspects of finding one in your house is the implication of what that means: it can equal an infestation as some females do not need a male to reproduce. They are amazingly prolific breeders as a single pair can have hundreds of thousands of offspring each year.

The female carries her eggs in a sac called an ootheca wrapped around her abdomen and drops it just as the babies begin to hatch. Furthermore, they mature in just 35 days. Infestation numbers can become staggering rapidly, and not only that, but they can get into everything—food supplies, flooring, walls, ductwork, plumbing, furniture, electronics, bedding, and more.

Cockroaches are among the most challenging insects on the planet to get rid of once they’ve infiltrated your home. Over-the-counter pesticides rarely work against them since many species have developed immunity to commonly used products.

In fact, more people move from their lodging due to them than any other pest-related problem. If moving is a consideration, beware. They are also adept hitchhikers, one of the reasons they can spread throughout neighborhoods so quickly. They are more than happy to move in anywhere they can find water, warmth, food, and a dark place to hide. They have infamously adapted to survive under the harshest of conditions. You’ve probably heard the adage that roaches would survive a nuclear apocalypse. Actual scientific studies are inconclusive about that, but there is no doubt that they are clever, industrious, and hardy insects. They are also dangerous to our health and carry various diseases and parasites, including E. coli, salmonella, polio, hookworms, tapeworms, and roundworms. They aggravate allergies, asthma, and breathing problems.

There are approximately 4,600 species of cockroaches today, and about 30 of those are attracted to human dwellings. In Utah, they are a real problem. Two of the most common species in the state are the German and American Cockroaches. The German is the smaller of the two, growing to about 5/8 of an inch, and is light brown to tan in color with dark stripes behind its head. The American can grow up to 2” and tends to be more reddish-brown with a darker color on the plate behind its head. Both species have wings; however, only the American is capable of flight.

If you’ve spotted the pest in your home or see droppings, little black specks around sinks and food storage areas, the probability is high that you have an infestation. Your wisest move is to contact a professional exterminator immediately. Only a pro can effectively eliminate the problem in its entirety. In Cache and the surrounding areas, the number one pest control company to call is Cache Pest Control. We are experts at dealing with roaches, and we have countless five-star reviews and happy clients to prove it. Not only will we help you eliminate them, but we’ll help you keep them from coming back. Contact us today.