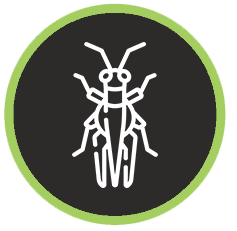 One of the oldest herbivore insects globally, grasshoppers have been around since the Triassic period, roughly 250 million years ago. They usually live on the ground and use their powerful hind legs to quickly leap out of harm’s way. While they are typically green, they may change color or form swarms when there are large populations near each other for extended periods. When swarms are formed, they can do major damage to crops such as cereals, grains, and the like. Swarms of feeding grasshoppers have caused famine and other devastating effects on humans since Biblical times. In 2020 they destroyed many gardens right here in Cache County.

There are over 10,000 species of grasshopper in the world, 400 of which are native to North America. They are one of the most common insects in Utah, causing thousands of acres of cropland per year to be sprayed in an effort to reduce the damage. Three main groups of grasshoppers predominantly reside here: the slant-faced, the band-winged, and the spur-throated grasshoppers. In the last few years, we have also seen the clear-winged, big-headed, Scudder’s short-wing, and the migratory red-legged grasshopper.

There are two types of grasshoppers, long and short-horned. Some short-horned species are referred to as locusts, and they are known for being the more destructive. Different species vary wildly in their behaviors. While most are solitary and only come together for mating purposes, the migratory species can form swarms that are millions or even a billion strong in their search for food.

They get their nutrition from multiple plant sources, although some may also feed on smaller insects or animal droppings. Either way, once they’ve infested your land, it is very difficult to get rid of them on your own. They tend to wipe out the available food in an area and then move on to the next nearby source.

Because their jumping ability is the trait that most people associate them with, most don’t realize they have wings. Their flying ability depends on their specific type. Most species are strong flyers, which they use as another technique for avoiding predators who may be looking to turn them into a snack. This is not the grasshoppers only defensive mechanism, as those who have picked one up may have found out. Depending on how the grasshopper feels about the intrusion into its personal space, they may spit a brown stomach liquid in an act of “defensive regurgitation,” https://www.healthline.com/health/do-grasshoppers-bite which has been referred to as “tobacco juice.” The name is more likely based on the insect’s affinity for tobacco crops.

A grasshopper infestation is no joke. They can become so populated in an area that yards can have eight or more insects per square foot, which ensures someone can’t take a step without crunching a bunch of the creepy-crawlies. Lucky for the residents of Arizona, Cache Pest Control has experience required to handle the pest problems you might be experiencing, whether grasshoppers or others. Contact us today to see what we can do for you to make your Cache, Rich, or Box Elder county property bug-free.