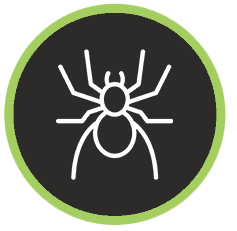 They’ve got eight legs, spin webs, and pop up everywhere from the corners of your home to your freakiest nightmares. As some of the oldest land-living creatures, spider’s ancestors have been making their webs and catching prey in unique ways for at least 400 million years. With thin bodies and spinnerets, the first definitive spider fossils are from the Devonian Period, more than 150 million years before dinosaurs. By the Jurassic Period, 191 to 136 million years ago, spiders had evolved into more niche species, splitting off into more diverse families of arachnids, like those that lay traps or ambush prey rather than waiting for something to get stuck in their webs.

If there’s one thing you can count on when it comes to these hardy arachnids, it’s that they are on every continent except for Antarctica and have established themselves in most ecosystems, except for in the air and underwater. There are over 49,600 types worldwide, making them seventh for species diversity. All of these species are both predatory and carnivorous, except for one tiny individual. The Bagheera Kiplingi, a small jumping spider that lives in the Amazon, is the only spider in the world that gets its nutrition from stealing nutritious bits of acacia leaves from local ants.

Over 20 species of spiders have been identified in Utah, including at least one that can be very dangerous to humans. While all spiders are venomous, luckily, not all of them are poisonous. Some of the creepier specimens that live here are the Funnel Web, Wolf, Orb-Weaving, and Cobweb spider. The Funnel Web is known for being shy and moving up to three feet per second. It has a bite that causes pain, redness, and swelling for up to 10 days. They got their name from the shape of their web and lie in wait at the small end for its prey to wander into their domain.

The Wolf is a large spider with great eyesight. It is named for its method of hunting prey, pouncing, and ambushing victims similar to their canine namesake. The Cobweb, sometimes called the Cat-face due to their unique body markings, spin their geometrically patterned webs near outdoor lights where flying insects are attracted. Although they lack the telltale red hourglass marking on their underside, they can look very similar to the Black Widow, which Utah is also home to. The Widow hides in webs in dark, tight spaces and are not a bug to mess with; 4-6 fatalities are attributed to them yearly.

Regardless of the spider you have in your home or business, at Cache Pest Control, we want to help you remove the problem. With so many pests out there ready to invade your home it’s no surprise that every so often you’ll run into one head-on. From ants to spiders, roaches to rodents, Cache Pest Control has the experience and tools necessary to get rid of your pest issue, quickly and efficiently. You’ve worked hard for your home or business, so allow us to make sure your pest problems go away for good.