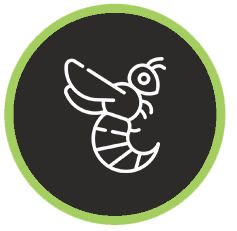 There are many theories why people hate bugs, and the emotional response we have for them is disgust. Some believe the fear has evolved to avoid a potentially bad encounter with a pathogen-carrying insect. Others believe it is linked to the urbanization of our culture and an increase in the numbers of creatures we find in our homes. At Cache Pest Control, we believe the cause is much simpler, getting stung hurts. It hurts so bad, in fact, that biologist Justin Schmidt created a scale rating the stings by pain factor from one to four, with four being the highest. Bravely, the Schmidt Sting Pain index data came as a result of the doctor being stung over one thousand times.

We are home to many creatures in northern Utah that make his list, with some near the very top. The apex of the bunch, by name, is enough to send chills down your spine, the Tarantula Hawk. No, it’s not a bird, but a giant wasp that can grow up to two inches. They do not resemble tarantulas but hunt them. The powerful sting paralyzes the spider and allows the wasp to lay eggs in it. The larva then feeds off the spider and avoids eating vital organs to prolong the spider’s life, very scary stuff. Fortunately for humans, their venom is not life-threatening. Unfortunately, the pain they cause is otherworldly. It is the most painful wasp sting in the world and luckily only lasts three to four minutes. It is a four on Schmidt’s pain scale, and he described it as having a running hair dryer dropped into your bath. Avoid this one at all costs.

Coming in at a three on the pain index is the Red Velvet Ant, but it is not an ant at all; it is a wasp. It has been nicknamed the cow killer because it has been said that the sting is so painful it could, well, kill a cow. While it is not true, it has been described as hot oil being poured on your hand. The females have the stinger but are wingless, while the males can fly but don’t sting.

We are also home to aggressive species of social wasps, which have smooth stingers, allowing for multiple stings. Unlike bees, these wasps don’t die after stinging a victim. Yellowjackets are responsible for up to 90% of stings, but most are blamed on bees. It does not take much to get them riled up, especially during the day, and they are already one of the most aggressive wasps.

Bald-Faced Hornets and Paper Wasps are not as aggressive, but do attack when threatened. Their nests are often built on human dwellings and should be removed by a professional. Most people are unaware that they have allergies to these insects until they are stung, so please don’t take that risk.

In Cache, Box Elder, and Rich counties, Cache Pest Control is here to keep you out of harm’s way. Our experts can remove these stinging threats from your home and business. Contact us today and avoid the risk of creating your own pain scale.